summer - each stub needle of


*
Mario's poetry and prose has been published in the UK, in Canada, Australia, USA and (in translation) in countries including Italy, Spain, Ukraine and Romania. He has numerous critical, environmental and philosophical articles to his name as well as short stories, social analysis, science fiction and prose/poetry for children.

read some of Mario's other work

read Mario's essay on poetry [for the British Council]


poems          Scroll down for samples of Mario's poetry for adults [including science-related poetry]....

Poets & Players    5 March 2011, Whitworth Gallery, Manchester
Note: if Youtube below doesn't play, click here for archived video (this may take a short while to download) - by kind permission, 'Poets & Players' (not for redistribution)

talk
lip to lip as
though morning

just made us –
parted these
mouths

wan
as clay to
make way for

words that are
for us to
try

first
time on air
deft as dew on its

leaf – so let me
speak as an
adam

who looks on a half-
made garden
& come

eve
-ning will
change his mind


everyone begins as fish &

you – on placenta duvet &
hunched round self as wom-
bed ones are? – as though

space without even
navel-twisted purpled
rope to hold you

like over-sized blazers, lipsticked
with doughnut sugar and jam, and girls

I peered into the deep pile of her mop,
saw white crumbs of scalp.   Smelt sulphur.

First detention ever, for using perchlorate
to singe her initials in benchwood.

of custard forever stranded between
dummy lips - Use your loaf boy.

Too late.   Hovering behind the homework
each night: her marooned complexion, those

small white teeth.   That sulphurous perfume.
End of term.   Her hand in my pocket

my éclair in the other, I blew it.
Three stupid words.   I'm a Catholic.

The shop - a delicatessen now.   The school
long since converted.   Yet, hanging round

the drains, something still of Mr Grant
and her - that whiff of coconut mat

in her blouse, his nicotined lard of finger
and thumb, the spatula pinched between

dipped in the tart yellow of that test tube:
Make a note boys.   Sulphur.   Flowers of.

Easy for me, your son,
youthful lungs trawling in one sweep -

billions of atoms Galileo
inhaled.   It took a full

week for your retort -
as always, off the nail.   Must be I've used it

all then.   From Siberia
to Antarctica - from slack-

pit to spire.   That's
why each draw's so, so bloody hard.

Your drenched face was me,
silenced.   Had to catch you

last thing, at the foot
of your Jacob's Ladder, ascending to the one

bulb of the landing
toilet, to tell you

I'd checked with sir.
You can't use it all, I piped, not in a hundred

Mouth bluish, a slur
suspended over your chest.   Fist white

on the rail.   You said
Don't hold your breath.

Afternoons in his study I squat
at the mahogany cabinet.   Papa and his

rows of plump bodies.   One a bruised
grape - another a spotted sultana engorged

in brandy.   Some are a meeting of legs
and little else.   Bristled tarantulas

Once, I caught him.   Late with a woman -
eight limbs akimbo.   Two upturned faces.

Our days spiral out from morning's
brown-paper packets: India, Indonesia,

Australia, Tasmania.   I run scissors
round the edges - plop the drowsy knots

into glass.   Then the muff of chloroform.
Formaldehyde.   Sulfide of hydrogen.   Which

asphyxiant?   They kill so differently.
How he'll wince if legs claw, snap - bit

his lip to a leech of milk when one slipped
up my skirt.   I giggled.   Kept it alive a week.

sots of hair that toboggan the bathtub
then tickle for air between my palms.

Each day his lips are laid with more
purple eggs.   Tonight the jaws dribble

eat - says the pain, the pain is
sucking him out.   Patience, he whispers.

I take the largest wad of cotton,
step up to the bottle.   Twist

the stopper from its slender brown
neck.   In the water of his eyes


my hair is a clot of spiders.

It puffed up our brains -
a bicycle-pump pressure down rubbery cords.
One hundred and eighty-six thousand
miles per second.

Dolphin has no such constancy,
hears like soup.   Its grey-blue steel
jerks into air, makes children gasp.
Dolphin hoops the water - each leap
equal to its aether.

On the west coast I dug
for potatoes.   Light there took its time
to gather, took time to roll in
its hard-earned pillows of dark.

Our Enlightenment boys
ply the radioactive, black-goggled
in the bomb-burst.   They squint past embers
at the rim of the universe, urgent
for the one dark thing.

Already they catch it, condense it,
flourish it across the benchtop
like a royal flush.   Bounce it off the cheek
of the moon.   Make it check itself -
snitch on the slightest anomaly.   Back
and forth, the caged exactitude.

It's the one constant, they said.
Let us build all space, all time, all
knowledge around it.

But the dolphin.   The filed
white teeth, its white life.
It has missed the tide.
The fish-mammal is beached, flesh
desiccating in iridescent decay.
Its shrill scrimshaws to the marrow.

The children think it is smiling.

"Whenever you see a green space in Berlin be very suspicious." Pieke Biermann

A shell ladders the wire fence top to bottom -
skids to its middle in mud, a huge sizzling clove.
And out they stalk under wide noonlight -

wary at first, casting this way and this
with the yellow of hunger that winks
in phosphorescent coins.   The cats currmurr -

a liquid that beats in their throats low and thick,
almost a cello.   Movement stirs instinct -
ankles, wrists, pale exposures of neck.

Jaguar begins.   Her continents of muscle
flinch.   She unwinds her crouch into the convoy's
parallel herd - embraces from behind, full pelt,

a traffic policeman, his white-gloved salute
the flash of a doe's tail.   In the act of being
savaged his hands signal on - and for seconds

diverted trucks respond without dent or screech.
On Tiergartenstrasse, Panther is surprised
onto its haunches by Oberkommandierender Guttmann

rounding a bend.   Animal meets animal.   Panther
grins - lifts a black velvet claw.   Guttmann
raises a hand.   And for a moment they are old

co-conspirators slapping pad to palm - before
a single swipe opens a flap in Guttmann's pot
neatly through the buttonhole, spills his coils

into winter which at last he feels, threading him.
Panther swills bloodwine.   Fangs the sweet cakes
of a half-digested Limburger lunch.

Orang-utan has mounted a tram.   Points back
at children, one arm trailed in a mockery of style,
chin cocked to velocity's breeze.   Tonight she'll drag

knuckles right up the Reichstag steps, plant
a trained suck on the cheek of the porter.   His look
will pale her into intelligence.   On Potsdamer Platz

Zho crops turf.   Her eyes betray a sidewise disposition
towards predators louche in the alleys behind speakeasy
and bar.   Yet something is missing from the maw

of buildings - a tooth pulled from history to make
this square of sward, which Zho crops simply because
it grows, because it ranks so unnaturally green.

Last is Python.   Her anvil head, by degrees,
jacks towards dim hammerings of free air, grim
to push the die-cast snout into any nest of blood.

The cold slides into her.   She slops into culverts
heavy as a rope of copper - moulds to the sewers,
wraps the city in coils of intention.   Develops

a rattle for Russia, a string of diamond yellows
for Poland.   She winds up a tension.   And Berlin ticks
inwards, becomes a city breathless, a gasp of dust

where Volkswagens are specks, circling crazily.
But there is nothing to fear.   Not now.   The cats
have had their fill - only pawprints lead through snow

down to the mouths of alleys.   A white-gloved
claw is on the kerb.   The people walk round it, pull
tight their collars.   Eventually, from a windowbox

in Charlottenburg Palace, a single petal of phlox
will bear down into the shallow cup of its palm
with all the weight of a snowflake.

They had to teach me
from scratch.   Teach me

to breathe.   As though
I had fallen out of space or

up from water and breath
was labour - each breath

this world life is indifferent.
You must will it in.   Will it

out.   I look at my son -
those white cheeks that

tight frown and
I wonder how I can

breathe.   He says - Mama
when you go to sleep to-

not allowed to run.   Or
jump.   Like that boy who

hanged himself with a
belt.   I watch him.   And he

hand to check the rise and
fall of my chest.   Tells me he

I teach him how to fly.   If
you go with Grandpa he

says - will you be able to
breathe?   He says this and

his cheeks run wet and
he runs short of breath so

we sit once again to
teach each other how --

You bury me in concrete.   Bury me
in lead.   Rather I was buried
with a bullet in the head.

You seal me in powder.   Cut the hair
last.   Then take the trimmings
and seal them in glass.

You wrap me in plastic.   Wash me
in foam.   Weld the box airless
and ram the box home.

For each tomb that's hidden a green
soldier turns.   None decomposes.
Nothing for worms.

A buckle.   A pencil.   Break one thing
I left.   Give some small part of me
ordinary death. 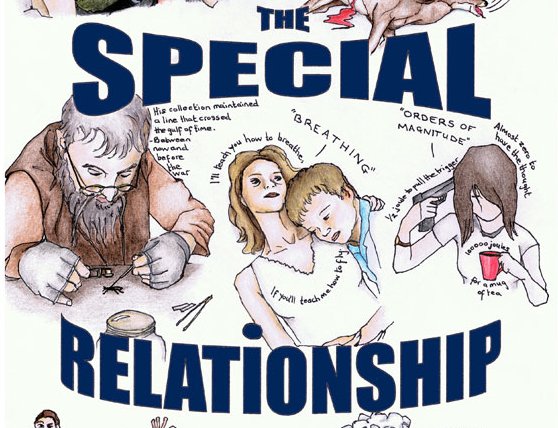